We survived…and we survived with Power the entire time.  Toby really enjoyed hunkering down with me on the couch (see picture).  He was also very relieved to go outside this morning for a long walk!  I was not as excited about the walk this morning..its 35 degrees out!  The nor-easter is here but I have no snow at this point. I am thankful for that.  I guess this means the Hurricane officially brought winter.

As someone who has a little experience with Hurricane’s growing up on the Gulf of Mexico I have to say this was a weird storm!  The winds were awful and scary sounding but it was the strangeness of it being 50 degrees, not 100 degrees that I couldn’t wrap my brain around.  It reminded me of a Blizzard, minus the snow.

We got so lucky.  There are a few trees down in my neighborhood and there are some people with water damage in their homes that are close to the water.  We have a lot of people in the area who are without electricity but we got lucky overall.  My heart goes out to those in New York and New Jersey.  It doesn’t look good.   Especially when you think about New York City where most of the people rely on public transportation and now the subway system has water in it.  How long will that take to fix?

We did have a little scare early this morning. I was awoken to the sounds of sirens early this morning.   The building directly behind mine caught on fire.  There was a massive fire and rescue response (I saw at least 8 fire trucks, 4 ambulances, and several other rescue trucks).   They put the fire out quickly and I think everyone was okay.  My poor neighbors, its not really a great time to be displaced.  Thanks to the emergency personnel who responded…they did an amazing job.

Toby hunkering down for the big storm

Just a few of the many Firetrucks that responded. 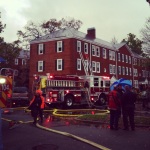 3rd Floor was on fire.

Tree down in the neighborhood